Welcome to Week 4 – the self-editing week.

This can be one of the most dreaded parts of the writing process, and for good reason – nobody wants to kill those darlings.

This isn’t always the case.  Some writers LOVE to edit, and you might be one of those. If you are – AWESOME!  If you’re not – that’s ok too – you’re in good company.

I personally don’t mind editing, but I find editing longer works to be daunting.  Editing something short, like my WIM draft, that’s pretty fun – though time-consuming.

Either way – editing is where the magic happens.  Every experienced writer will tell you this, and it’s true.  No first draft is 100% perfect, and most of them are dumpster fires. So at some point, if you want to get better, you need to become at least decent at self-editing. 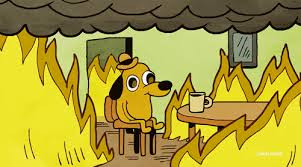 So how do you become good at self-editing?

The first step is becoming decent at STORY ANALYSIS.  This is what this post focuses on.  How to analyze your story to make sure that it’s working on a basic story structure level.

My book on Wattpad, The Perfect Story: A Book on Story Craft & Editing, has been my attempt to document my journey of understanding story structure, analyzing stories, and applying those techniques to my own stories as I draft and edit them.  For this draft, I used a variety of analysis tools to look at developmental edits before I did any line editing.

Above are my initial sketched out analysis notes.  In my experience – which is also illustrated with examples in The Perfect Story – the best, most time enduring stories are those which when analyzed by multiple methods have a structure that holds up when put to the test by as many different structure methods as possible. Pride and Prejudice is one such story.  It is amazingly well constructed.

Since I optimally want my stories to be as good as P&P, I apply the same analysis to my drafts.

This type of analysis I first found in a twitter post referencing Editor Cassandra’s blog. I thought it looked like an awesome thing to try.  As with most outlining or analysis tools, I find it almost impossible to use them before I begin to draft – but they’re intensely helpful afterward to make sure my story is working – or to highlight the places it’s not.

This was my sketched out 9-grid plot plan.  I grabbed some themes for the top to help me orient myself in where I wanted to story to go/what it’s about based on the draft.  Then I filled this out and it began to generate some questions: 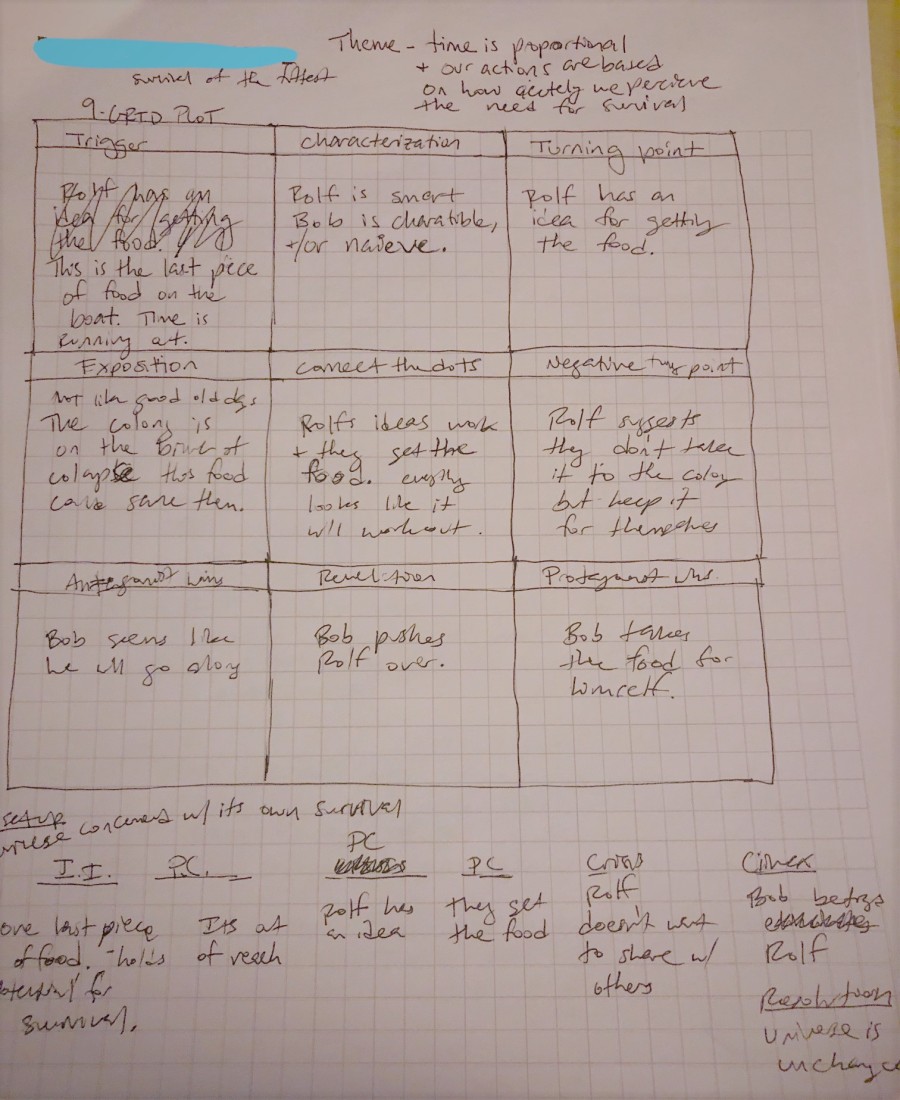 Below is my typed up 9-grid plot plan where I worked through some of these characterization and plot element issues. 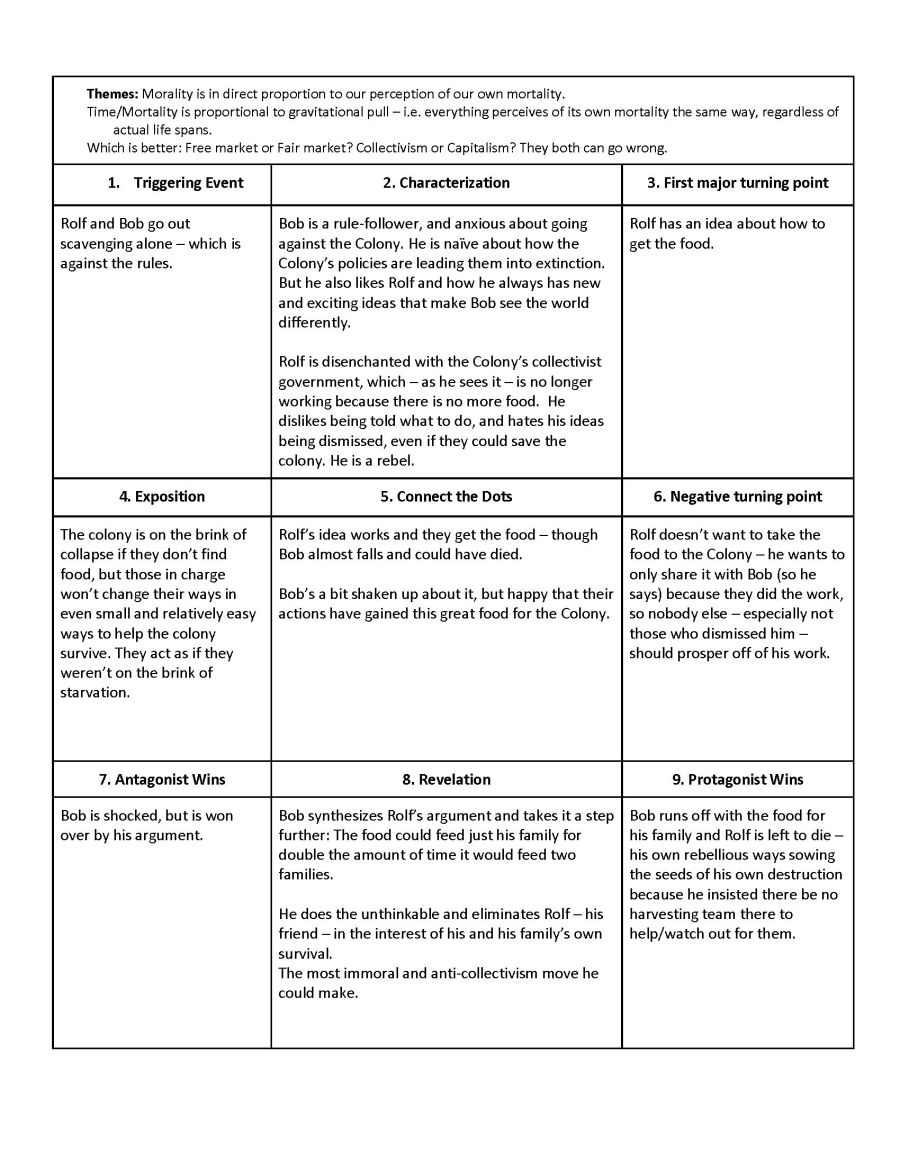 Next, I looked at the story elements which are outlined in Story Grid, which is a fantastic book and podcast for helping writers understand story structure and how to self-edit.

I went through the 5 elements of story structure, as well as the one I call the 6th in The Perfect Story – The Turn.  You can see my notes below and the questions/ideas that this analysis generated. 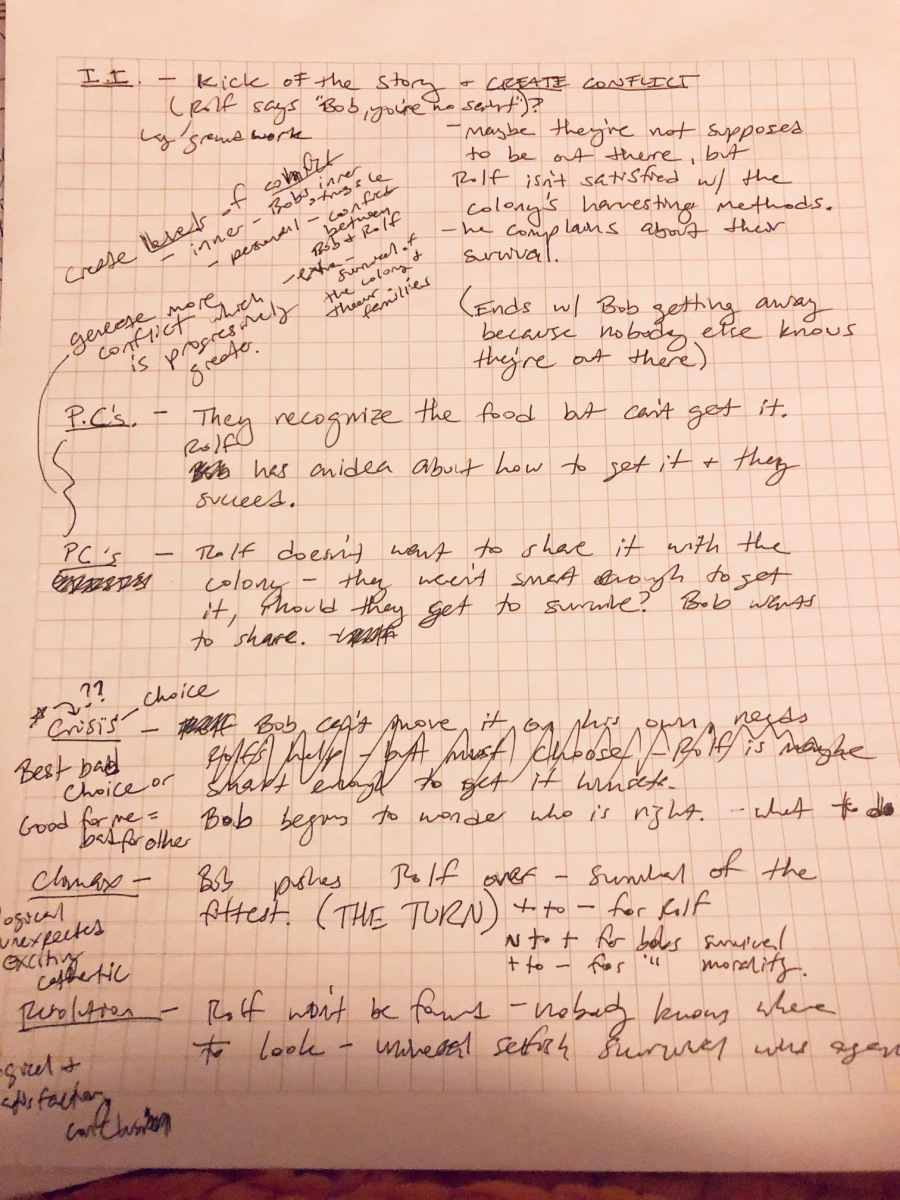 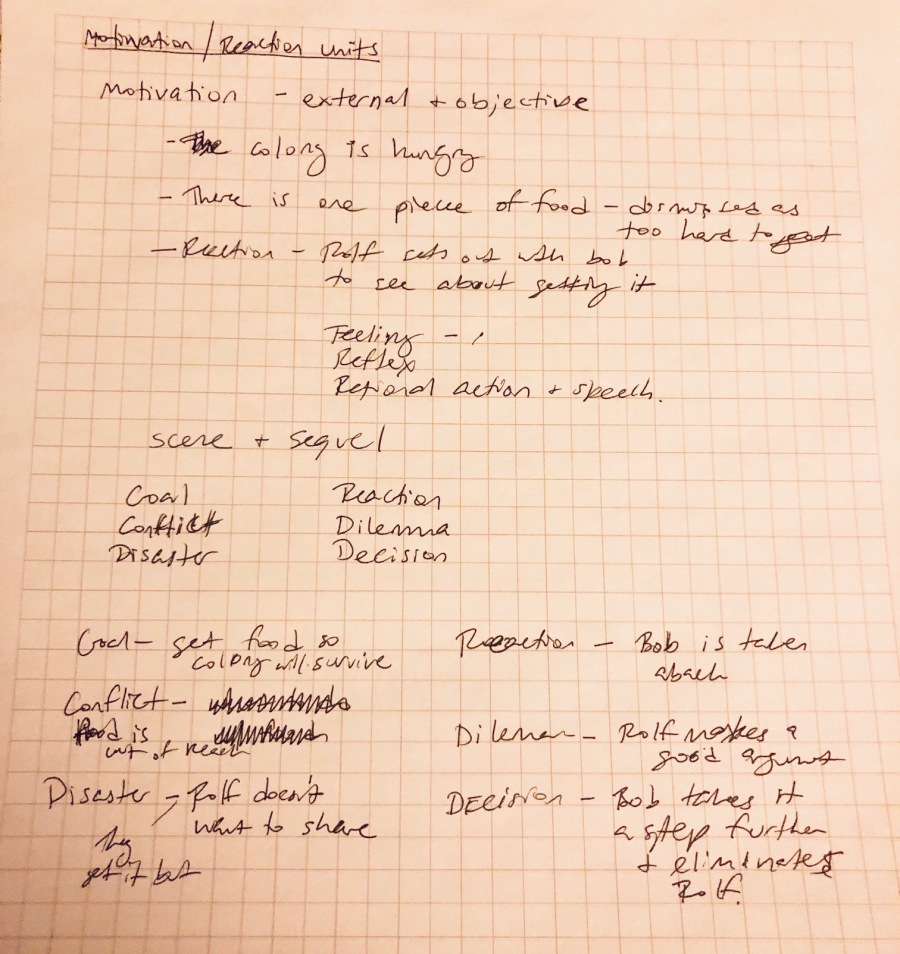 This was a technique I was turned on to during some research – which may have also been prompted by a tweet. It’s from Randy Ingermanson’s website and is focused on the following story elements to construct large and small scale scenes.

He calls them Motivation-Reaction Units (MRUs) and they are pretty much like “beats” which make up the larger elements of “scene” and “sequel.”  I recommend you check out his site for more in-depth reading on these.

You can see how I broke out the elements in the visual above, and where I attributed them in the story. 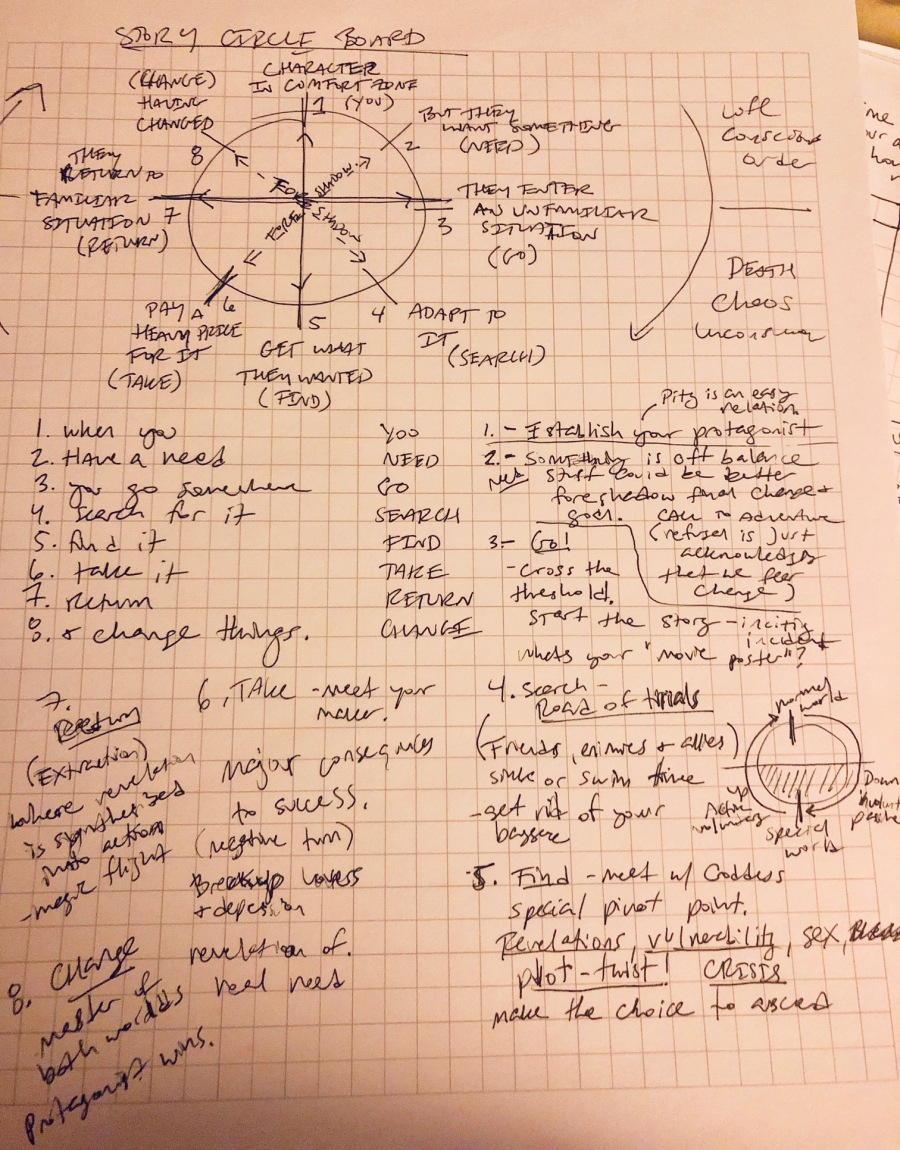 Dan Harmon’s Story Circle is a fascinating way to look at story structure and he has several posts which go in-depth into how he structures story.  Learn from the best right?

His structure is based on The Hero’s Journey, but this visual is very helpful in understanding it in a way which helps me write and analyze story structure. 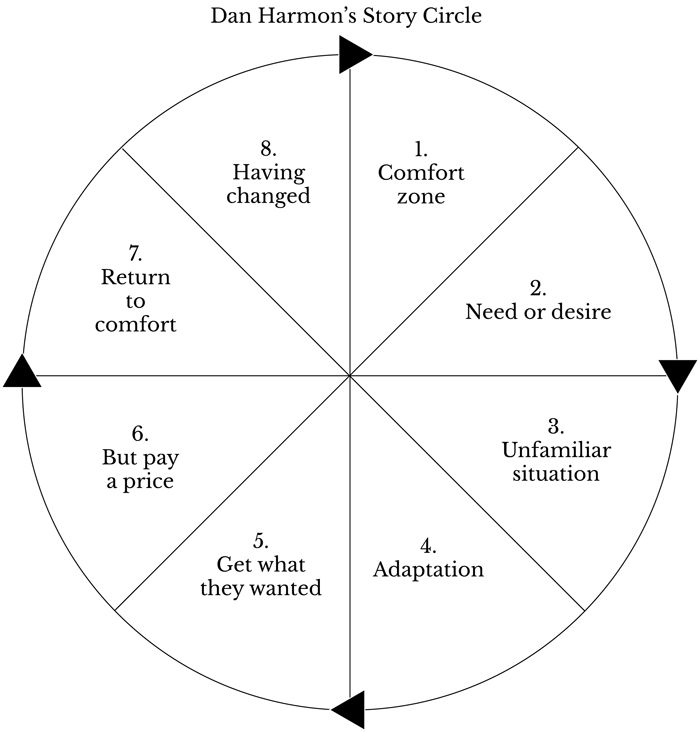 So how did this work with my story?

My next post will show my actual editing – line by line – of the short story and will unveil my second draft.  I hope you enjoyed this post and found it helpful for your own process!

Keep up with the other writers:

This site uses Akismet to reduce spam. Learn how your comment data is processed.